A Strong Woman is Running for President

I am so proud that we have such a strong woman likely to be the next president of the United States.  It is sad to say, but I don’t think everyone is proud.

In fact, I think there are many that feel threatened by such a strong woman. The day Hillary Clinton became First Lady, and began working on establishing health insurance for all, was just too much for the Good Old Boys (GOP) and conservative Democrats to handle.

We need to look past the Republicans’ effort who are trying everything and anything to keep this wonderful strong woman from becoming president. They have been trying, in vain, to discredit Hillary Clinton for years. We cannot let them get away with it. 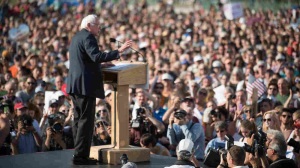 Bernie Sanders with We the People

So we are back. Back in the windy world of presidential politics.

As a person whose goal is to seek and disseminate the truth, I will say that I believe Bernie Sanders is the most truthful candidate I have ever seen.  He wants to work within the rigged system, then mobilize the American people to fix the system with their votes. The current system is set up so  private companies can give a lot of money to politicians so that they will legislate policies that enable these companies to make more money. This prevents our elected officials from doing what is best for We the People.  If these politicians do NOT do what the private companies want, they will give their money to another candidate, a candidate that they CAN control.

Well, the days are over when the People vote against there own self interests by believing the false rhetoric  “take our country back” or “make America great again.”  What the People didn’t understand, until finally Senator Sanders is now telling them, is that when they say “take our country back,” what they really mean is, take it away from We the People, and give it to wealthy.  When they say “make America great again,” what they are really saying is make the wealthiest Americans great again. And the word “again” is really unnecessary because it always was great for the wealthy, and it always will be great for the wealthy unless if we, yes, We the People, stand up and VOTE!

Bernie Sanders is the only one who can effectively bring this truthful message to We the People, and enable Us to rebuild this nation, to make is strong, to make it safe, to make it the envy of all the world.

At last weeks Republican campaign rallies, the words of McCain and Palin clearly gave way for their supporters to make calls like  “Traitor!” “Bomb Obama!” “Kill him!” “Liar!” “Off with his head” and the use of the “N” word to a black cameraman while their candidates stood in silence as their fans cheered them on.

In addition to these horrific and dangerous shout-outs, which some fear could be a call-to-action, the questions coming from these town hall formats had nothing to do with the economy, nothing to do with the issues, but rather were expressions of fear of a Barack Obama president, fear that we would have an “Arab,” “a Muslim” or even worse “a domestic terrorist” in the white house. This fear, courtesy of John McCain himself , is currently being promoted in his attack ads against Barack Obama. These attack ads were developed to introduce a connection between Barack Obama and 60’s radical Bill Ayers and the clearly untrue notion this relationship implies that Obama might be a domestic terrorist himself. Everyone, including McCain himself knows that this is patently false, and McCain has stated so.

I do not believe that McCain himself thinks for one minute that Barack Obama has a terrorist bone in his body, but McCain was clearly generating a fear of Barack Obama, even if it means misleading the American people.

Careful what you wish for, Sen. McCain, because you just got it.

John McCain has now had to awkwardly back peddle, to the boos in his crowd, he has had to say that Barack Obama is “a Christian and a decent family man.”  This environment of anger, hate and fear from the McCain rallies had not been challenged, until the national response, through media, polls and other statements have expressed concern over the danger of allowing such rhetoric to continue, forcing McCain to ask his supporters for calm.

And just now, as I am writing this post, it was announced that Rep. John Lewis said “What I am seeing reminds me too much of another destructive period in American history in the not so distant past” when George Wallace “created the climate and conditions” which provoked hate.

Barack Obama responded that he does not believe that John McCain is promoting the policies of George Wallace and that to his credit John McCain himself has spoken out at his own rallies to calm the hateful rhetoric of his supporters. Obama did continue to say, however, that Sarah Palin’s should revoke her remarks that Barack Obama “pals around with terrorists,” a notion that John McCain has had to rebuke himself.

Several republican spokesmen were on the air just a moments ago continuing to state that Barack Obama was palling around with terrorists, even after McCain himself has stated that this is not true.

This latest, very latest back and forth between camps has, at the very least, shown an undisciplined republican party, where some spokesmen are saying the Obama did pal around with terrorists, while John McCain himself is saying that this is not so.

A Sense of Humor. What can you learn from John McCain’s?

IClick edit above to add content to this empty capsule.

Would you ever tell a joke that would insult a person you love and respect? By insult, I mean finding humor in anything that would hurt them.

I have a little “check” I do when I hear a joke that I find offensive. Recounting the same joke in my head, I replace the demographic or the situation at the “receiving end” of the joke, with my own. For example, a joke about women, I replace with a joke about me, or a woman I love and respect. If the joke offends me after hearing it in a way that made it personal, than I seriously question the judgement, ethics and beliefs of that joke teller.

Let’s have a look at the those jokes that John McCain finds funny. I find them highly offensive and revealing, but you should see for yourself.

Here are some of John McCains most offensive jokes:

Women Voters: Help keep McCain out of the White House!

I must admit, I am quite concerned about the fact that I personally know two or three women that are progressive, intelligent Hillary Clinton supporters who want to either vote for a third party candidate, stay home or write-in Hillary Clinton.

Of course any of those actions would give John McCain a significant advantage that could put him in the White House.

One argument I have heard is that the Obama campaign was sexist and they do not want to “reward” such behavior with their vote.  I certainly understand that sexism is alive and well in this country and I was appalled by some of the rhetoric used during this primary season. I should also mention that I was equally appalled with the racist rhetoric I had been hearing.  The reality is, McCain would actually legislate sexism. We cannot afford this step backward.

Withholding our vote from Barack Obama would put McCain in office. On sexism, McCain is no talk and all action!

Nancy Keenan, president of NARAL Pro-Choice America said, “He voted against family planning, he voted against the freedom of access to clinic entrances — that was about violence against women in clinics,” Keenan says, adding, “He voted against funding for teen pregnancy-prevention programs, and making sure that abstinence only was medically accurate. This is very, very extreme.”

The bill that McCain voted for that which denies coverage for birth control actually mandates coverage for Viagra! When he was confronted with this, he went into a long, long pause looking like a deer in headlights. His actual response was that he didn’t want to talk about it, he doesn’t remember his vote and he doesn’t know what his opinion is on this.

McCain has stated that Roe vs. Wade “must be overturned.” His position is that abortion should be not legal even in cases of rape, incest or life threatening conditions for the mother.

John McCain has opposed the Fair Pay Act – a bill that would guarantee women equal pay for equal work. To make matters worse, McCain insulted women by saying that the solution to employment discrimination was for women to get more “education and training.”

Now, think about this. When you watch the polls and you see McCain so close to overtaking Obama, do you ever actually imagine that this man, John McCain, could be our president?  Does that trouble you in any way?

If so, than you know the only decision you can make, for woman’s sake, is to pull that lever for Barack Obama.Do you dislike him so much that you would be willing to give the presidency to an institutionalized sexist?