A Strong Woman is Running for President

I am so proud that we have such a strong woman likely to be the next president of the United States.  It is sad to say, but I don’t think everyone is proud.

In fact, I think there are many that feel threatened by such a strong woman. The day Hillary Clinton became First Lady, and began working on establishing health insurance for all, was just too much for the Good Old Boys (GOP) and conservative Democrats to handle.

We need to look past the Republicans’ effort who are trying everything and anything to keep this wonderful strong woman from becoming president. They have been trying, in vain, to discredit Hillary Clinton for years. We cannot let them get away with it.

UPDATE: 1/8/11 Sarah Palin’s website “Takebackthe20.com” has been mysteriously taken down, but not before I made a copy of it. Visit Take Back the 20.com to see my copy of this website!

Could this be the first shot fired in the war declared on the American People by the right wing fanatics?

In a website launched on Thursday, the six-month anniversary of the health care law, Palin puts a bull’s-eye on 20 House districts under a headline that reads,

The map, reproduced here from Sarah Palin’s website, showed a bulls eye as seen looking down the barrel of a rifle. The heading reads “We’ve diagnosed the problem… Help us prescribe the solution.” 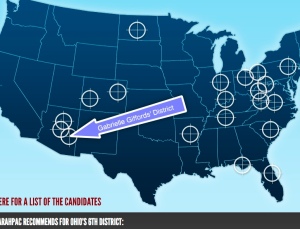 Target Map Direct from Sarah Palin's Website. Shows Target on Giffords' district where she was shot

Is this the new culture of politics that the extreme religious right wish to promote?

Listen to Sarah Palin debate on the radio

First, you might want to get a little background on the dairy industry bailout that they are discussing
here .

When Sara Palin was introduced to the American People, it didn’t take but a minute or two before she blew out her first lie when she said “thanks but no thanks” on that bridge to nowhere.

She not only supported this bridge, that would have brought only a few dozen people to their homes, but fought hard to secured a $223 million earmark in 2005.

As soon as she realized the entire country was making a mockery of this bridge idea, Palin called off construction midstream, and NEVER RETURNED THE MONEY!

Now how well can we trust a politician who, in her first few minutes of her first national appearance while the entire nation was watching, choses to include an easily verifiable LIE!

McCain is maverick no more.

When Tom Brokaw interviewed Tim Pawlenty on Sunday morning, August 31st on Meet the Press, he let Pawlenty say anything without stopping him for clarification or checking his statements for truthfulness.

Pawlenty fired off a long list of items to support the claim that John McCain spent his entire lifetime branding himself as a maverick. He can brand himself a maverick, but since he became the republican candidate for president, he became anything but a maverick in order to gain the support of his party.

Let’s take each point that Pawlenty fired off with Mr. Brokaw.

McCain on torture, and this is probably the most sinister flip flop of all:

We know that McCain experienced first hand the brutality of torture.  These experiences not only made him a hero, but it made him a maverick. It showed McCain’s ability to empathize with the detainees as people, first.

But sadly, in February 2008, McCain reversed course on prohibiting waterboarding and supported Bush’s policies on the matter. This was a major disappointment, because we had thought McCain was such an empathic maverick, a compassionate conservative, but he deserted this position to vote with Bush.  This is a very profound shift, it is a change in his own ethical beliefs.

In addition, McCain insisted that everyone, even “terrible killers,” “the worst kind of scum of humanity,” and detainees at Guantanamo Bay, “deserve to have some adjudication of their cases,” even if that means “releasing some of them.”  McCain now believes the opposite and voted with Bush.

He initially opposed indefinite detention of terrorist suspects, but when the Supreme Court reached the same conclusion this year, he called it “one of the worst decisions in the history of this country,” supporting Bush, once again.

In fact, McCain had originally supported closing the detention facility at Guantanamo Bay. Later,  as his campaign for president was gearing up, he changed and voted with the Bush administration.

McCain on taxes and spending:

McCain supported the Lieberman/Warner legislation to combat global warming, but later deserted that view.  On the environment,  Palin strongly supports drilling in her own state of Alaska, in ANWAR, the Arctic National Wildlife Refuge. McCain had said he was against ANWAR drilling, but not according to his voting record. Three years ago,Ted Stevens (R-Alaska) had attached a provision that would permit the ANWAR drilling to a must-pass defense spending bill.  Environmental groups were enraged and knew of McCain’s position against the drilling, so they arranged a meeting with McCain and asked him to support their efforts to remove the ANWAR drilling provision from the bill. He he refused to strip out the provision, and the bill failed in the senate.

John McCain is running his entire campaign based on who he used to be, not who he is now. McCain even chose a running mate, Sarah Palin, whose extreme views are consistent with new John McCain.